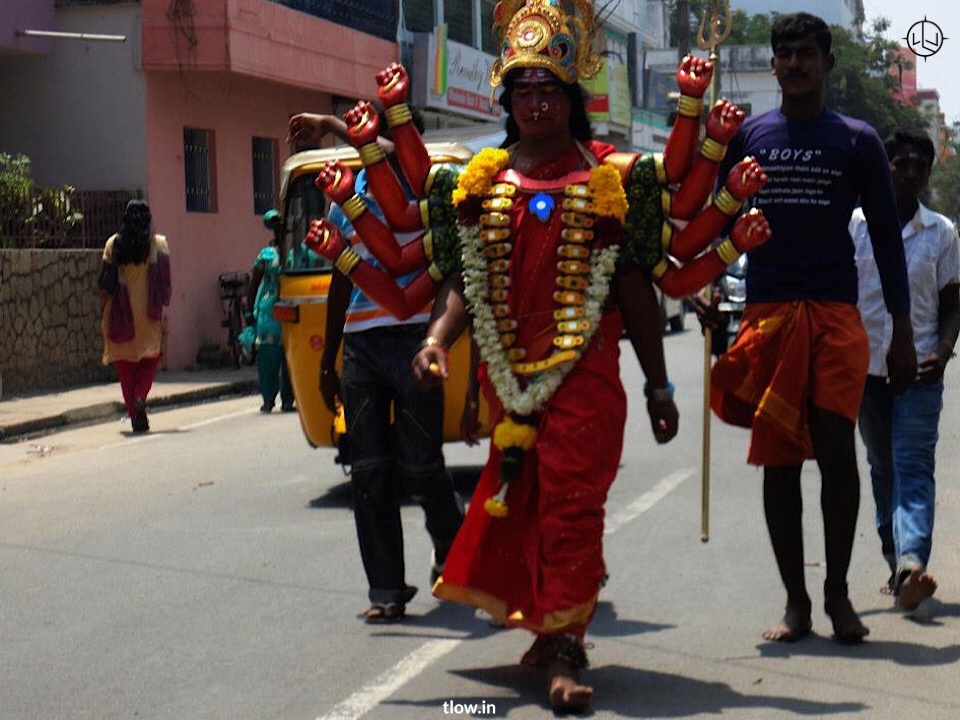 Pondicherry which is well known for its French culture has much more to offer to travelers than just the French heritage town and churches. The town has a vibrant Tamil feel to the place enhanced by its culture and cuisine.

While strolling along the streets of Pondicherry during the day time, it is a common sight to find men dressed in sarees with their faces painted and all decked up in jewelry. They are generally accompanied by a clan of people of which one will play the drums and another who is mostly a child roams around with a money collection box. These people claim to be devotees of goddess Kali. On a single day it is not uncommon to find a handful of such kind of devotees wandering the streets of Pondicherry asking for alms.

The attractions and the sights in this section of the town are rather limited as compared to the French heritage town. The church of Sacred Heart of Jesus which is located opposite the railway station is a must-visit. The church boasts of splendid European architectural work both inside and outside.

Arikamedhu is another place that attracts a lot of visitors mostly historians and archaeologist since it is assumed to be the place of Roman settlements nearly 2000 years ago. Remains of a French Jesuit mission house assumed to be built in 18th century are also visible here. Arikamedhu has also been listed under the archaeological survey of India.

Villianur Thirukameeswarar Temple is a must visit place and is popularly known as the Villianur Temple. The Villianur Temple is situated 10 km away from the Pondicherry main town. It has a huge 15 meters tall temple chariot that is normally taken out on a procession during the Brahmotsavam, which is basically the annual festival of Pondicherry. This festival is held during the month of May to June along with the appearance of the full moon. Thousands of devotees come here for this ten-day festival.

The best way of getting around these places is by renting a scooter/ bicycle or hiring an auto-rickshaw for the entire day. A vehicle is recommended since these spots are far from each other.

The street food available is to die for, the food is not only reasonable but also very tasty from fried bhajjias and egg dosas to prawns biryani and fried chicken. The streets of Pondicherry have it all. There are plenty of restaurants and small eateries all over town and nearly all of them have something unique and different to offer. Food is served on a banana leaf in most of these restaurants’.

Accommodations in not much of a hassle here and there are plenty of guest houses and hotels to meet the needs of all kinds of travellers from the budget backpackers to the business travellers. Everyone will find a place that will suit their requirements. Most of the budget backpacker type guest houses are located in close proximity of the bus station.

This is a part of Pondicherry which is mostly overlooked by most travelers since the French heritage town overshadows the other side of the cultural heritage this small union territory has to offer.