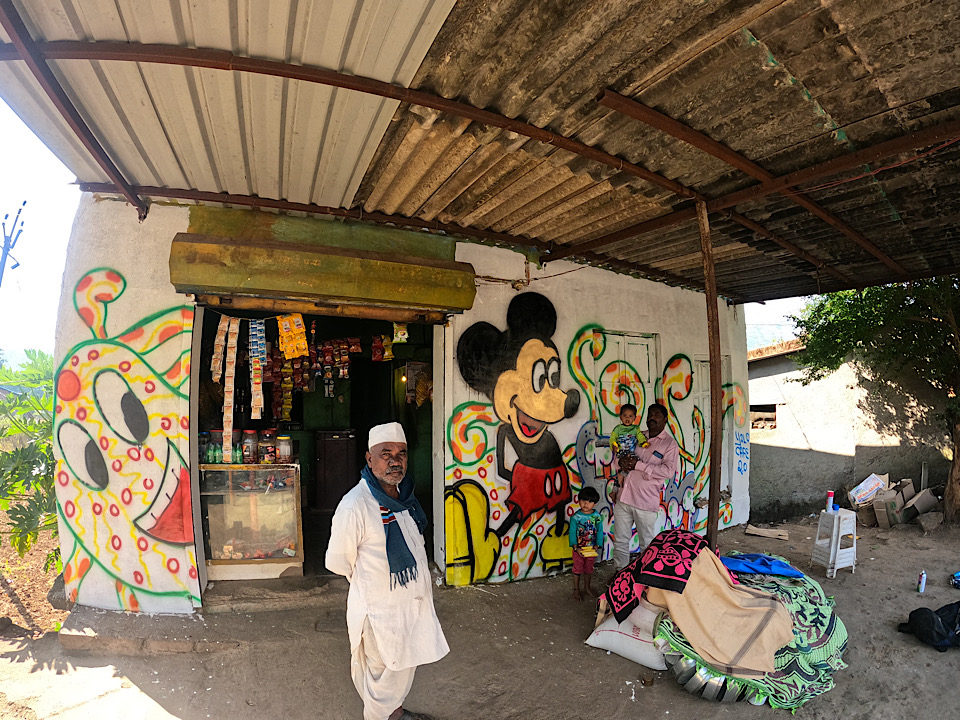 A beautiful village and also the heart of Bhandardara is situated at the main junction before taking the right towards The Yash Resort. It’s said the only way you can change one’s perspective towards anything is to add some of your own to it or modify it so that the message can be directly or indirectly conveyed to the masses.

An art project to beautify Bhandardara as a destination was surely one of the biggest projects and the most creative ones for sure. It all started by looking at the main tourist destinations around the world and one of the most powerful mediums to get exposed was art.

So we have an aim to depict only positivity and creativity through this process since most of the travellers are from the 80’s and the 90’s era the decision was to make as many related artworks to the same era.

After some RND the best and the most convenient option for us was to stay inclined towards cartoons which most of us relate to. Well there was only one way on earth that the cartoons couldn’t be replicated and remembered for good.

While the whole world was in lockdown and having Bhandardara as a whole to be recreated, wasting time wasn’t an option since we were on a mission to change the world as soon as possible.

A huge consignment of paints were called in for this project ranging from exterior acrylic, oil paints, spray cans and also an airbrush just in case. After teaming up with the local human paint machine a.k.a Pappu bhai, we were ready to start spreading happiness throughout the village.

Our initial days started by carrying a 60 litre backpack and a small handy bag pack with the camera and other equipment on a cycle which was damn exciting to experience.

We managed to reach Varangushi which is 6 Kms away from TYRB and were also in the best of our  moods to start beautifying the village. An old shattered bustop was our first canvas where on the lower part of the bustop you will see a nice yellow calligraphy font with THE YASH RESORT written in red, yellow and green and bang opposite the Bubble font with the same name.

During the first artwork itself there were a couple of locals who stood by and also asked me why we would want to waste paint on such a useless and unused wall. On revealing the idea and getting to see the process soon most of them willingly gave me their house walls to be painted.

So from three walls which were selected at the beginning we already had five new walls to be painted and soon the whole village wanted us to paint their walls.

Nevertheless we are on a mission so we are going all out to make this happen and change as many walls and lives if possible and mainly spread awareness on art and happiness in this project.

Looking at our dedication towards this project and ofcourse the willingness to get it done, the cycles were taken away and a bike has been provided to make it more efficient.

The next day we completed Chinchwad bus stop which is quite a place that looks graffiti bombed! With Pacman on the outside walls and a classic Pink Panther relaxing inside will make you want to stop by and click a photo for sure.

We soon headed back to Varangushi the next afternoon with our bag full of new and fresh paints. A Mickey Mouse, Shinchan and also The Ed, Edd & Eddy have been sprayed around the shutters at  the main junction. Lately we have been meeting people who have told us about how great this artwork looks and we feel that the message has already started to spread out to the people.

Well for all the artists that feel the urge to BE the change and would love to be part of this project to beautify and create the next Hippie destination feel free to contact us or come around to experience the winds of change.