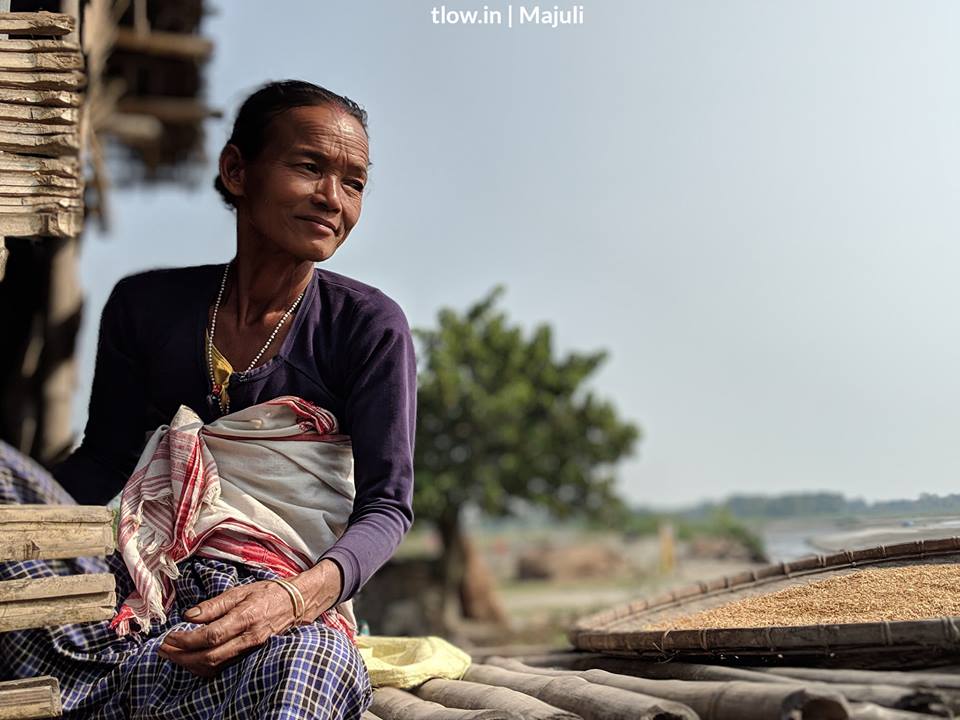 The Missing tribe are scattered all around the island of Majuli in Assam and is one of India’s largest tribe in terms of population. The missing tribals have inhabited this island in Assam ever since the 16th century.

The tribals are originally nomads from South East Asia and have roots dating back to the Abo Tani who are believed to be the first men on earth hailing from the Chinese and Mongolian descent.

Missing – the tribe name has been derived from two words from their local dialect which is named after the tribe and also has a written dictionary and developed grammar. ‘Mi’ which means Man and ‘Asnshing’ which means worthiness. The two clubbed together gives the name Miasnshing which over a period of time has been translated to ‘Missing’.

The Missing tribes have villages all across the Majuli Island. All the villages have pretty much the same setup. Elevated houses made of bamboo and cane, if it’s a big village then a small school with a rescue boat parked near the road is available.

The tribal community is very rich in culture and have different folk dances and instruments which are played during different occasions and festivals. ‘Ali-aye-leegang’ and ‘Pohrak’ are the two festivals celebrated by the Missing tribes depending on their agricultural cycle.

‘Ali-aye-leegang’ is usually celebrated on the first Wednesday in February marking the start of the sowing season. It is a five day festival and is celebrated by sowing seeds in their respective fields and praying for good crops for the season and for the overall well being of the household.

During this festival, songs and dances are performed with traditional folk instruments by the young men and women in every house courtyard. On the third day of the festival, families host a feast for guests and the fourth day is known as the day of taboos where no wrong deed is practised. A sticky form of rice covered in leaves with cardamom is boiled and offered to the guests during the feasts.

‘Pohrak’ is the post harvest festival which is held during the early winter months or in August and September. It’s a three day affair where the tribes invite a large number of guests from neighbouring villages. It’s a common custom to invite Missing women married outside the villages during this festival. Dance and music is also an important part of this festival.

The main source of income for the tribals is from their fields, with rice, cabbage, potato, tobacco being their main crops. They also grow mustard and bamboo.

At a very early age, the girls are taught the art of weaving the traditional way by using silk or cotton pieces of cloth. The Missing tribals are also well known for their preparation of Gadu which is a type of woolen blanket that requires a lot of skill and knowledge to be made. Unfortunately, the art is becoming extinct over the last few years. The women also contribute to the family income by rearing pigs and other cattle outside their houses.

They Missing community also practice Doni-Poloism which is the worship of the sun and moon god. It is believed that the original Abotani was a son of the sun and moon god. They are not very religious and do not follow any stringent religious practices. Most rituals are animalistic in nature and although they follow Vaishavaism which is completely opposite in nature. These practices have coexisted in the Missing community.

Another practice among the Missing community is that of animal sacrifice where a sow or pig and some hens are sacrificed to ward of the evil or the wrongdoing of someone in the family or in the community.

During such occasions, it is common to see young men hitting the walls of the houses with the help of sticks to get rid of any form of ghosts or evil spirits. After this, a feast is held far away from the village and anyone passing by the venue willingly or unwillingly have to either wait until the end or pay a fine to leave.

Accommodation  and food in these villages is possible, but is only limited to an extremely basic stay with the family in their warm bamboo hut, where they will surely serve you Apong (rice beer), papad , dal, rice and mix vegetables.

A couple of days is more than enough to get a first hand feel and experience of living life with the biggest tribe in North East India. These villages are strictly only for travellers and not tourist.