I had travelled to Parvati Valley a year ago. Did the Kheerganga trek, Kalga and Kullu. Skipped Kasol, primarily because it was the end of December and I knew it would be expensive. And fed up of the city, I was looking forward to spending time by myself in the mountains. However this time, thanks to my travel job, I had Kasol in my blueprint.

I reached Kasol around 7 P.M and it was already dark and cold. It somehow felt like a mini-city with a lot of shops selling hippie stuff like dream catchers, hemp wallets, hemp bags,  garments and warm wear. I decided to leave my bags at the place I was staying in Kasol. It was a homestay with local houses around.

Freshened up and decide to take a walk to Chalal. It was already late, but I was high on energy. The gushing sound of the Parvati river, the forest scent from the pine trees. And as I moved forward, switched off my torch. Looked up at the illuminated sky. It suddenly felt so peaceful and I realized darkness also leads to mystic, beautiful things. I reached Chalal and the Cafe’s were already closed. Since I took my own sweet time to hike, tripping over the peaceful vibes without a fear.

Returned back to Kasol and couldn’t fix my mind to what I wanted to eat for dinner. Wandered around, crossed the bridge after the bus stop and there was a general store. Got in to munch some chips and the lady said they also serve food. Ordered a cheese omelette which was Rs.90.Combined with a pack of Uncle Chips, it felt filling.

Woke up around 7 A.M and headed for a walk to the river. I like how the night subsides and nature does its magic of renewing the fresh air. It was cold and the temperature was around 2 Degree Celsius. After a good 10 minutes walk towards Manikaran, I found a tea shop open. Asked if breakfast was available and the server said yes. I sat by the riverside enchanted by the view of the Parvati Valley. Dense stretch of Pine trees on both sides, the river flowing with its fury and snow-capped mountains in the background.

The server arrived with the breakfast which included Aloo Paratha, Veg Maggi and Chai. The Aloo Paratha was served with yoghurt and pickle. Vegetable Maggi was a delicious as it had a nice serving of boiled vegetables. Chai was nice and hot and a little sweet always in Himachal Pradesh.

Sat by the river and realized it was already 10 P.M. Now that’s the beauty of Kasol, time flies and the valley enchants you in its own magical way. I didn’t want to move or go back to the homestay.

After another half, an hour by the river, headed back to the homestay, packed up and set off to Barshaini. With all the description, people and travel bloggers had painted in my head. I realized why people come to Kasol. Apart from the view of the valley, psychedelic music and maal easily available. It’s also a gateway to places like Chalal, Malana, Tosh and Kheerganga.

Before getting into the bus, there was a German bakery right next to the wine shop. Tempted to eat some baked stuff, I picked up a braided Nutella roll. Although the bake display did not look fresh, I ordered the chocolate bread and found disappointment. It was very dry and the chocolate was barely there. Copious amount of glaze on a bread. Who puts glaze on a bread, bakers that don’t serve freshly baked items. The cakes also looked dull and I didn’t want to chance again ordering one.

Later that day, it started to rain and I must say the enchantment of even the city like Kasol multiplied. The rains made the temperature drops and I was glad I got a bus to Barshaini at the right time before getting drenched. All in all, Kasol is worth a visit. 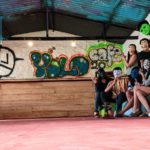