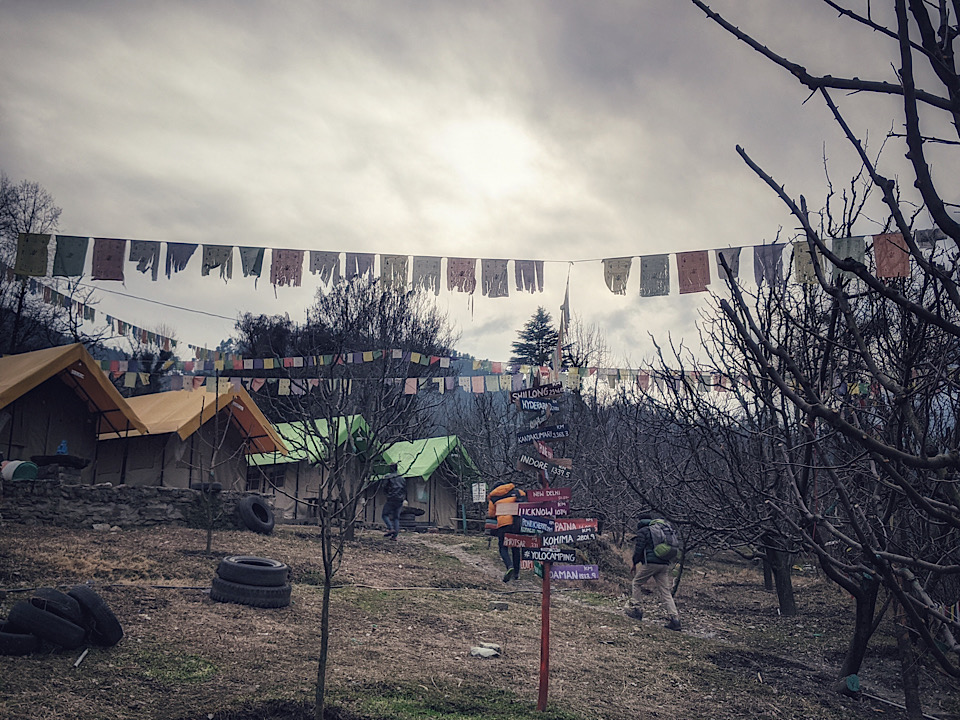 Back in the winter of 2015, I met a local from Parvati Valley who told me about his desire to start a campsite near the Malana power plant in his apple orchard. But he had major trust issues with people from outside the valley.

His name was Amarnath Thakur and he was related to the family who ran the guest house I stayed at in Kasol. He claimed the place was a hidden paradise with the river on one side and the mountain on the other.  Something I found very hard to believe. As a day job, Amar drove his four-wheel camper (milk truck) up and down to Malana, worked in his family farm and said that was pretty much life in Jari.

He went on to tell me, that once I saw his place, I would forget living in Kasol and never want to stay there. (I have been living at least a month in a year since 2010 in Kasol). Amar spoke about how the place had the potential to be a one-stop destination as for anyone in the valley. In his words, “Bhaiji, full Shanti place!”

Over the course of the next two years (now in 2016 May), Amar and I kept meeting each other on a regular basis. Since, now he was the person to ferry tlow trips to Malana. His camper was the perfect blend of offbeat that our Parvati Valley trips needed at that time.

After one such Malana trip, driving us back to Kasol, he asked me to come to meet him in Jari and check out the farm. Being a stubborn person that he is, the next morning Amar was there in Kasol with his truck, this time to take me to see his farm. I had to go.

A short six-kilometre drive from Kasol and we came down the first slope behind the Jari police station and that’s about it. He stopped the truck, pushed a run down gate with barb wires and we talked over a very small path through apple fields, with the Parvati River at full force down below. After walking for 300 odd steps, we reached an unusual place, which he claimed was his farm and his land. This he told me was the place. I remember laughing and telling him he’s lost it in the head.

I told him, the place was just too raw and would take a lot of work. I never had the time nor the money to get into something like this. To this, Amar had a reply which ended up being the key ingredient. He said, “Bhaiji, but you know the people who would be interested.”

All I said to him, was that no one in the city will even consider coming to the mountains and setting shop. But the idea of building and developing a new destination was something which fascinated me. The thought of having a Bhandardara style campsite in the Himalayas loomed in my head for the next six months.

The seed was sown in my head by Amar. I went along with my usual work of running trips and gathering content along the way. Most of all, bouncing the idea (of a campsite in an apple farm) to different people on and off trips.

I still remember, most of the people who had heard the idea on trips, though I had completely gone mad after the rebrand. I could see it in their eyes! But the thought of getting our own campsite, an operational base in the Himalayas was a possibility, if I kept trying. The logic was the same, I had to just convince one person about the idea and things would move.

While bouncing ideas around in Bombay, I happened to bump into two school friends (rather classmates) out of the blue. The two of them – Ibrahim and Zuber, who I had not met or spoken to ever since 2006 or maybe even longer. We had barely ever spoken to each other while in school, also.

A random ‘Hi’ from Ibrahim Mulla and Zuber Makandar led me to go for a spin in their car, where we caught up on life and spun around in the Bombay pollution inside and outside. They were one of the very few (less than a dozen) odd people who I knew before starting tlot/tlow who actually came for one of my Bhandardara camps, in the initial days back in 2015.

I told them, how I was planning on building a similar camp site in the Himalayas. But this time, it was going to be ‘Glamping in the Himalayas’. They instantly jumped at the idea and asked me, if I could hook them up with a similar kind of deal.

Initially, I had told them the place was taken (a tactic I used to see, if the person was really interested). A couple of days later, I got a call from Ibrahim telling me the two (Zuber and he) of them were actually thinking over the idea and really wanted to invest.

A few days later, I met the two of them in Zuber’s elder brother’s office in Marol, a over-crowded suburb in Bombay. We spoke at length in the night about the plan and what we could do out there. The two of them said, they were on board and had even booked their flight tickets to Delhi.

Around the last week of November 2016, the two of them along with their cousins actually ended up coming and seeing the place. We all went to the farm and the three of them – Amar, Ibrahim (Mulla) and Zuber (Zubey) got along like they were long lost friends. While I carefully got down to the river bed, I could see the three of them sitting on the big boulder along the river and chilling.

The following day, after a long discussion with Teku (who runs the place we stay at in Kasol) Amar’s mama (mother’s brother) we decided to start with building the path way to the campsite. Since after entering the gate it was just endless fields.

One thing which we all agreed upon that night was a long thought idea, I had tried and tested at tlow. That was to keep the cost constant, regardless of the season or time of the year. A place where people pay a fixed amount all year.

What started out as a 180 days project, took us nearly 355 days to build. The walking path way to the campsite took us the entire winter, from December 2016 to March 2017. The major issue was heavy snowfall, which hampered everything.

Once winter had gone, Ibrahim moved to the mountains making Amar’s house in Jari, his new home, while Zuber held the fort in Bombay.

The summer of 2017, Ibrahim and I met regularly in Kasol every time I was there and we spoke at length about how this campsite would be the place which would make people happy again.

In all this time since November 2016, I had not got a chance to see the camp site other than a few pictures and videos that Ibrahim and Zuber used to share when we met. The plans had moved on from a simple wooden cafe to a concrete structure with two rooms, six tents and a terrace. Add the natural elements (river, mountains, fruit orchard) the place sounded beyond real.

On one such of our meetings in my room in Kasol, I asked them what they planned on naming the place. And the two of them told me, “Majestic Valley”. Since that’s what they first felt, when they got to the place.

Then a few months later in September 2017, it was time to get the paperwork in place. From past experiences, one thing I learnt is that getting the right name was extremely crucial. So after a long night with heavy rains and no electricity after all our phones and power banks were out of charge. Yolo (you only live once) a phrase like wanderlust is what we settled upon.

Yolo had a ring to it. It had a meaning that’s what the place felt like when I had seen it as a farm and Yolo as a word was easy to remember and pronounce for everyone – the literate and illiterate.

A few months later in the winter of 2017, after 355 days of work, which involved donkeys, mules and over a dozen humans carrying every single construction material from the entrance gate near the road to Yolo camping. Around 10 fruit trees had to be relocated.

Starting with initial talks dating back to the winter of 2014 with Amar in Kasol. In 22nd December, 2017 Ibrahim and Zuber ended up doing the unthinkable for the Thakur family and tlow.

From February 2018, the tlow Himalayan team had moved into Yolo camping and this farm was now our very own operational base in the valley.

It was not till the end of May 2018 that I finally reached Yolo. Zuber by then had even got Ice, the husky to add that extra element at Yolo. The only thing that stood out for me at Yolo was the fact that even though we were actually cut off from civilization, the cell phone network (Airtel & Jio) worked super fast. And then, Zuber pointed at the network tower on the other side of the mountain.

A week at Yolo and I knew, this had to be the head office of tlow. It’s exactly what Amar had told me back in the day. I actually did not feel the need to move back to Kasol or Bombay. The place had everything from a training ground for the team to practice and work on content.

In the months to follow, it helped tlow hire people from around the country, including a few from our the village of Jari.

Today, nearly a year after Yolo started and after living six months in the farm which is now my brand’s head office, life has changed. This is just a step towards creating an ecosystem for backpackers and budget travellers, a place where you feel good, meet like-minded people, the tlow vibe stays with you for 365 days of the year with four walls and it costs a fraction of what our trips cost (starting at # ₹250/+)

Yolo is a place where you:

-> Short hike everywhere (you’ll understand when you are at Yolo)

-> Play with the husky

-> Chill by the river

-> Eat some fruits (pay and pluck)

-> Send postcards (pay only for postage)

Yolo is not a place tlow owns but it’s surely a place which is powered heart and soul by tlow. Yolo wasn’t just another random campsite in the Himalayas which ended up becoming the tlow headquarters. It’s been a project we have been associated with since 2015. This is the first major step towards creating the tlow ecosystem.

So, if you ever wondered what we at the back end of this website and travel company are doing, then come over to Yolo camping in Parvati Valley and we’ll show you what the future of travel will look like.