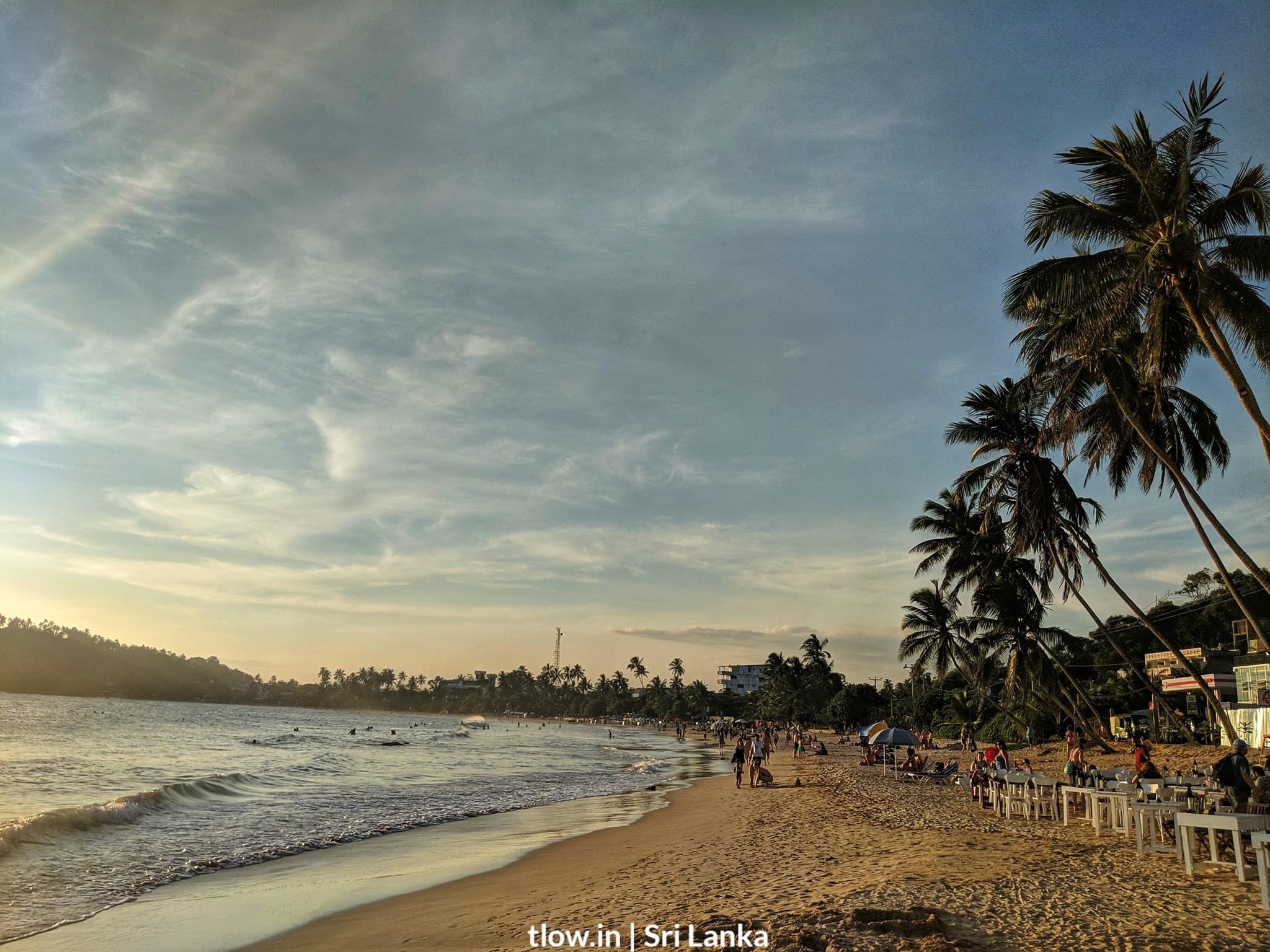 Mirissa is a small hippie beach destination located along the south coast in Matara district of the southern province in Sri Lanka. The town has become well known in the backpacker circuit for its beach parties and nightlife.

Mirissa is located roughly around 150 km south of the capital, Colombo and the best way to reach this beach village is by bus. There are plenty of buses government and private which run all day.  The local bus is the most economical way to reach.

Another economical way is to take the train to Weligama and then a connecting bus which is 7 km s to Mirissa. This is a more scenic way to reach, but one thing to keep in mind is that the train takes roughly 2-3 hours more as compared to the bus.

Once in Mirissa village, the best way of getting around is on foot. Everything is pretty much walking distance from the main road where the bus will drop you off at.  Cycles, scooters and tuk-tuks are easily available as alternative modes of getting around if walking is not your thing.

Post the tsunami, just like the rest of the southern belt everything that’s being developed around Mirissa is for tourism. So the minute you enter the village, you’ll only see signboards of home stays, hostels, guest houses and hotels.

It’s always better to get a room close to the beach since it’s the star attraction out here. The closer you get to the beach, the costlier the accommodation will get. Bargaining is a skill which will come handy while deciding on your room.

While in Mirissa, a few must do things include a visit to the fisherman harbour, the secret beach for sunset, hike to parrot hill lock and an early morning boat ride to spot the mighty blue whale. If the above is not enough, then enroll for surfing classes at the beach where they will teach you to ride the waves in three days of learning.

If you’re looking for a more relaxed time, then all you need to do is decide on a beach restaurant you want to spend the day at. Keep your belongings and head into the water for a swim.

Unlike most other commercial beach places in Sri Lanka, here they don’t charge you for the cabana as long as you agree to eat at their restaurant for the day. It’s a great deal considering you can leave all your valuables without worrying while you go for a swim in the beach.

Once you have decided which restaurant you want to chill for the day, the next thing to do is head into the water and catch some waves. The waves at Mirissa are a lot of fun.

The odd one will always come and slap you to the ground if you’re standing too close to the shore, such is the pace at with they come in with. The hot sun compliments the cool Indian Ocean water. This makes for an excellent day at the beach to just have fun, the old school way.

Whenever you need a break, hop out and head to your cabana and grab a beer and eat some fish. The beach life as we have all experienced in Goa is out in Mirissa at a better level. While at the beach, make sure you watch the sunset either from the sea or while in the shack.

You’ll be blown away by the change in sky from deep blue to blood red the sky will change beyond your expectations and imaginations. It’s worth taking a timelapse of the same just to be able to relive the moment again.

Just adjacent to the beach is the main highway which is along the Colombo-Matara highway. This stretch is filled with kuttu and roti stalls which make for a much more affordable meal as compared to eating at the beach.

There are even quite a few fine dine places which serve pizzas and other western food options. Try out the mixed sea food fried rice at at Mirissa. The fish is so fresh, you’ll be liciking your fingers once you’re done.

Mirissa is also well known for its night life and after hours parties. So these usually happen over the weekends in the months of December and January. It’s practically seven days a week. These parties are hosted on the beach by restaurants and have an entry fee.  It is worth going for one of these if you’re the kind who likes to party.

You’ll also see a lot of tourists drink at the restaurant next door and dance outside the one where the party is happening at. It’s a chill vibe at Mirissa.

The village has a lot of street art and it’s actually worth going around just to have a look at the art that’s been painted along the walls. Taking a night walk along the beach is a must.

If it’s a good day, you’ll even spot a sea turtle on the beach. So keep your eyes open while walking you don’t want to stamp one in the dark.

For the people who like to shop, Mirissa has a lot of shops selling t-shirts, magnets, wooden elephants, tea and everything that’s pretty much sold everywhere in Sri Lanka. Just make sure you bargain for anything that you buy. It’s all overpriced in this village owing to the vast number of tourists that visit the place.

If you’re planning on adding Mirissa to the Sri Lanka plan, then make sure you keep atleast two nights for this beach. You’ll understand why when you reach the pace.

The best time to visit Mirissa is mid-week if you’re looking for a quiet time and if partying is what you seek, then the weekend is your scene. Weekends tend to be a bit more costlier than weekdays.

Mirissa as a village is pretty well equipped with pretty much everything you would need as a tourist from ATMs to money exchange centers. The village has it all. So if you’re looking for a place to get a hippie vibe then Mirissa is the place for you.