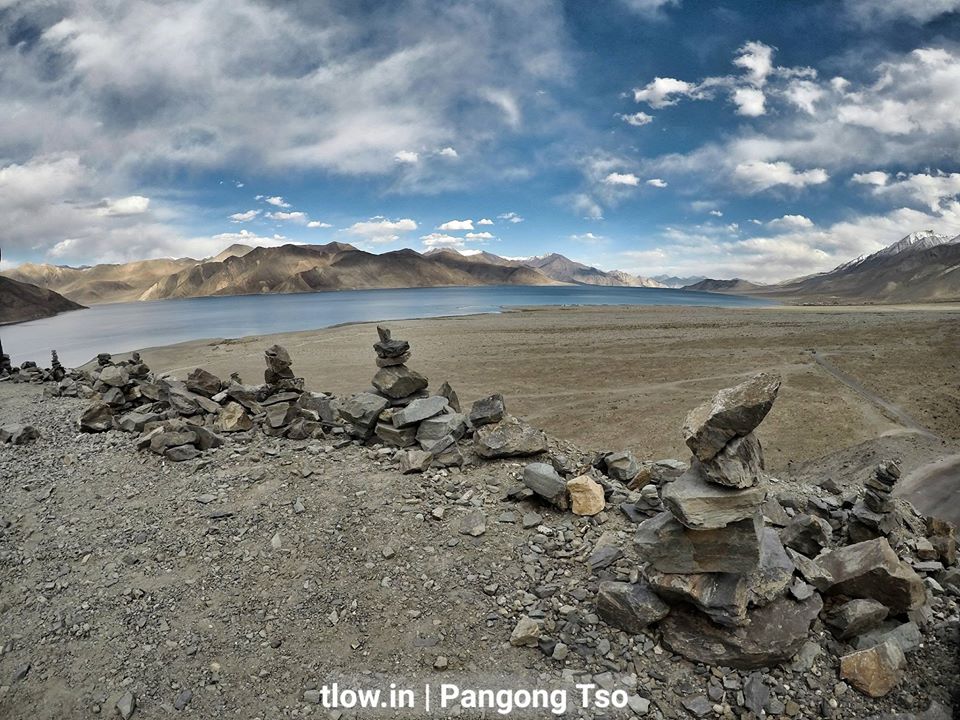 Pangong Tso the largest lake in the Himalayas, stretches for some 130 km, with a width of only two to six km. From its north-west tip near Lukung, the initial stage extends south-east for nearly 40 km before bending to the east over the border into Tibet.

Pangong Tso is situated at an altitude of about 13,900 feet above sea-level (4237 m). The name Pangong is a derivative of the Tibetan word Banggong co meaning “enchanted, long, narrow lake”. One-third of the lake is in India while the remaining two-third lies in Tibet, which is controlled by China. Majority of the streams which fill the lake are located on the Tibetan side.

This beautiful lake is about a five hours drive from the town of Leh in Ladakh region of Jammu and Kashmir. The route passes through the beautiful Ladakh countryside, over Chang La, the third highest motor-able road at an altitude of 17,352 feet above sea-level (5289 m). The road trip is an interesting and popular excursion by tour vehicles.

The first glimpse of Pangong Tso is of the serene, bright blue waters and rocky lake shore and this remains etched in the memory of tourists. These is a narrow ramp-like formation on land which runs into the lake, a favorite with travellers.

The sheer beauty of Pangong Tso is the fact that the lake displays multiple colours ranging from shades of blue, green and even sometimes appearing reddish. The rugged Trans-Himalayan mountains in the background make for a stunning panoramic view.

During the winter months from November to March-end, Pangong Tso is a lake that is completely frozen, despite being saline water. The saltwater lake does not support vegetation or aquatic life except for some small shrimps. However, there are lots of water birds. The lake acts as an important breeding ground for a large variety of migratory birds like Brahmani Ducks, which are a rare breed of black-necked cranes and seagulls. One can spot Ladakhi marmots, the rodent-like creatures which can grow up to the size of a small dog.

Pangong Tso lies on the Sino-Indian Line of Actual Control and hence requires an Inner Line Permit. Most of the lake is in the Chinese-controlled territory. Owing to Pangong’s proximity to the border, tourists are only allowed to visit the lake up to the Spangmik village.

For the hardcore adventure junkies, there are a couple of camping sites on the shore of Pangong. But do remember that the weather tends to get harsh after dusk. The place is a photographer’s delight and camping is the only option if you wish to see the sunset and sunrise.

Accommodation near Pangong Tso is very limited and not very affordable. Camping is the only option if one chooses to stay near the lake. Very basic accommodation is available in Spangmk and Lukung, which offer a couple of guest houses, one hotel with luxury tents. Home-stays are also an option in these villages which offer just a room and have shared toilets.

There are a handful of make-shift eating joints near Pangong Tso lake, these eateries are more like dhabas and nothing more. The menu at most of them is pretty much standard with noodles, momos, fried rice, veg thali and omelette. The safest bet is omelet or noodles. For the quantity and the taste the food that is served is relatively costly.

The best time to visit Pangong Tso lake is during the summer months from June to October, when the weather is pleasant. Light woolens are recommended even during the summers, since the temperature dips considerably during the evenings.

Pangong Tso is easily the biggest crowd-puller in Ladakh and is surely worth all the hype that comes along with the lake. Pangong Tso is a must-visit and is one place that no pictures can do justice to the sheer beauty seen there.