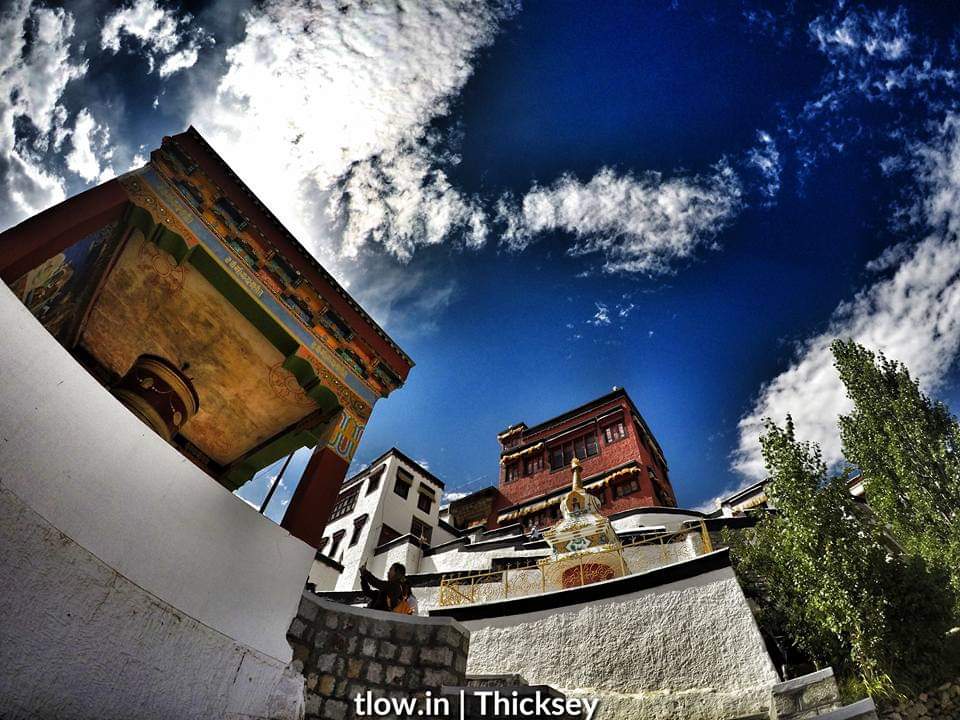 It was the very first time I went to the Thikse Monastery and without a doubt, it’s one of the best monasteries I’ve ever seen. The most beautiful thing here was the huge Buddha statue. It was completely mesmerizing and if it’s not in your bucket list as yet then it definitely should be.

The statue of the future Buddha came into being as a result of deep faith and devotion of the founder of the Gelugpa sect. Gyalwa tsongkhapa’s chief disciple Changsen Sherab Zangpo’s lineage whose living reincarnation is Thiksey Rinpoche, Kushok Nawang Chamba Stanzin. Rinpoche, along with his teacher, Kachen Lobzang Zotpa and Changtsotla, Venerable Lobzang Chodak, the monastery staff members and Sangha community and sponsors make this statue possible.

On July 26, 1980, His Holiness The Dalai Lama consecrated the statue. He said that at the full moon, the new moon and at each half-moon four monks should continuously chant the Maitreya Sutra (prayer). His Holiness said, ‘Rinpoche you are very, very lucky. This Maitreya is very beautiful. Even if you see this Maitreya again and again, you will never see it enough; you will always want to see more – you will never be satisfied. I have seen many statues but this Maitreya is very special for me. I have never seen a Maitreya like this before. Rinpoche, the Sangha community and sponsors will accumulate great merit.

The 12 meter (40 feet) statue took three years to build, with 30 people working continuously. It is made of clay and terracotta bricks painted with gold. One can only imagine the amount of time and effort that was put in to make this statue. Especially when they barely had any equipment compared to what we have today. Nevertheless, they still managed to make this beautiful 40 feet statue which we can have the honour of getting to look at it. The murals behind the statue tell the story of the future Buddha.

On the right side opposite the door are paintings of Thikse Rinpoche’s lineage. On the east side (the wall facing the statue) is a panel showing from left Dum Tonpa, Atisha, Legpai Sherab, Ling Rinpoche, 10th Panchen Rinpoche, HH 14th Dalai Lama, Trichang Rinpoche, Kacheng Lobzang Zotpa, Je Tsongkhapa and his 2 chief disciples, Gyaltseb Jhe and Khedub Jhe. On the entrance, walls are the pictures of the Buddha Sakyamuni, Manjushri, Maitreya, Nagarjuna, Asanga and 6 great Indian scholars.

It’s one of a kind, a completely stunning place with a lot to see and learn from. A must visit if ever in Ladakh. The different cultures and the way of life which was followed more than 1000 years ago will be information you can never get enough of. The whole day there are prayers that go on inside while playing the gong throughout the prayer. One of the monks told us that only in the night the prayers stop as the monks go to sleep.

However, before going to bed they all gather for one last prayer before sleeping. It is said to be such a powerful prayer that if said during the day or simply when there are visitors in the Monastery, there is a risk of things going terribly wrong. When asked as to what could happen, after a brief silence the monk walked away.